Developed by DASAL Aerospace Technologies and integrated with an automatic infantry rifle, DOĞANhas been completely renewed.

Equipped with an automatic infantry rifle, DOĞAN has been added to the armed unmanned aerial vehicles (Armed UAV) developed by the Turkish defence industry.

Producing rotary-wing UAVs in various classes as an affiliate of ASELSAN and ALTINAY, DASAL Aerospace Technologies showcased DOĞAN, whose development work has been completed, at the 15th International Defence Industry Fair (IDEF 2021).

Unlike its competitors, DOĞAN was developed as an integrated defence and deterrence platform with a 5.56-millimetre automatic infantry rifle mounted on a pedestal with 2-axis stabilized mobility.

Through the systems that DASAL Aerospace Technologies engineers have developed domestically and nationally, using artificial intelligence and image processing technologies, DOĞAN can function with its capabilities of target detection, identification, and focusing on the tracked target by processing the images taken via the camera on it. DOĞAN is capable of carrying between 100 and 200 rounds of ammunition, depending on the preference and need. 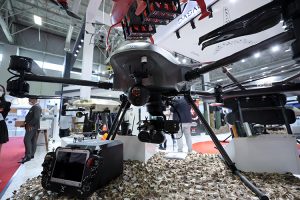 DOĞAN is designed to increase the user’s options in line with the mission scenario through single or serial firing modes and to hit the target directly with a high rate of accuracy or to put them under pressure fire, thanks to its software. The anti-jammer feature of DOĞAN also makes it very difficult to neutralize.

Stating that they developed DOĞAN to reduce the loss of life and injury of the security forces against terrorism and armed threats, Yüksel said, “It is a project we developed together with the authorities of need. Test flights and shooting tests have been going on for a while, we have completed the shooting tests and we are launching it as a final product in this fair.”

Explaining that the recoil of the automatic infantry rifle in DOĞAN is damped through a specially developed system, Yüksel said that point shooting is also possible thanks to the high stabilization obtained with this system. 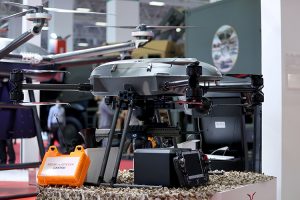 It has more capabilities now

Emphasizing that responding to threats from a height and from a greater distance, instead of using personnel, will prevent loss of life and injuries, Yüksel said:

“We plan to use DOĞAN effectively in the field, as it is capable of detecting, examining, and describing threats far beyond what the human eye can perceive, with systems such as thermal cameras and daytime cameras on it. There are similar works around the world about this. The reason why detail and test flights have been going on for a while is our effort to fully understand the needs in the field and transfer them to our platform. After these efforts, as of this year, our system has been completely renewed and equipped with a stronger platform. The useful load, that is, the weapon carrying system, was developed in particular. The ammunition carrying capacity has been increased, and a product that is capable of rotating 360 degrees, shooting accurately at any point, and offers the user ease of use has been released.”

It is ready for the final test

Caner Yüksel said that they expect DOĞAN to be shared with the authorities in need by making a demonstration flight and shooting test in its final form, and then enter the inventory.

Giving information on the performance indicators of the system, Yüksel said that Doğan can go to a target at 10 kilometres, perform its mission and return, and stay in the air for 30 minutes at full capacity. Yüksel noted that with these features, DOĞAN outperforms similar products developed in other countries.