ALTINAY DEFENCE Technologies introduced the 2 systems it has been developing for the first time at IDEF’21. These were the Helicopter Capture and Transfer System and the Laser Electronic Warfare System Stabilized Platform. The company also exhibited the 3-axis Stabilized SATCOM Antenna Pedestal for the first time.

ALTINAY DEFENCE localizes the Helicopter Capture and Transfer System for use in Class I frigates built under the main contractor of STM. The system, the first of which will be used on the ISTANBUL frigate, the 5th ship of the MİLGEM project, which is still being equipped, allows the helicopter to land safely on the ship in all weather conditions, regardless of the time of the day, including sea state 4. The helicopter landing operation is carried out by detecting and tracking the position of the helicopter approaching the ship through the electro-optical systems on the deck. The helicopter that has been safely lowered is taken to the helicopter hangar with straightening manoeuvres after being secured, and the operation is completed. 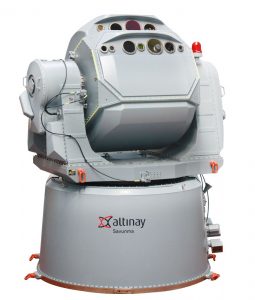 ALTINAY DEFENCE’s Laser Electronic Warfare System Stabilized Platform is used in the NAZAR Project, which is carried out under the main contractor of Meteksan Defence. ALTINAY DEFENCE’s solution offers stabilization in 2 axes up to sea state 6 for the useful loads on it. With a total weight of 3.5 tons, the platform can carry useful loads up to 600 kg.

The platform also provides thermal conditioning of the useful loads on it through heating, cooling, and dehumidifier subsystems The company developed the 3-axis Stabilized SATCOM Antenna Pedestal specifically for the satellite communication needs of UAVs and Armed UAVs. This product is currently used in CTech’s Satcom-on-the-Move (SOTM) Terminal. Since the product is developed with direct-drive technology, the angular positioning of the satellite antenna can be done with high precision. Reflectors of different sizes can be mounted on the product with high angular sensitivity. In this project, the mass production phase of which is still ongoing, 40 systems were delivered and an average of 500 hours of flight time was realized.